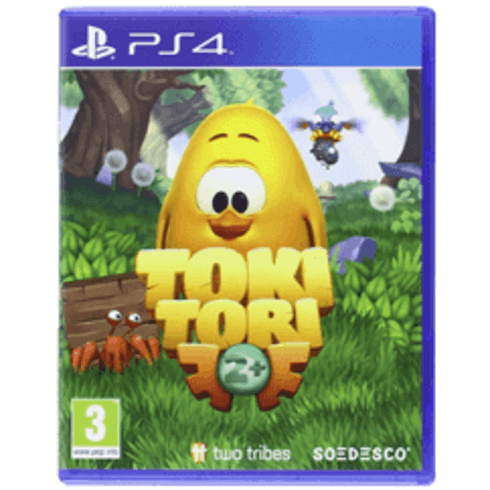 Toki Tori 2+ is a Metroidvania style puzzle adventure. There are no tutorials, there's no hand-holding, no-one tells you what to do in Toki Tori 2+. The fun is in exploring and overcoming the obstacles of the lush forest island on your own merit. Our unlikely yellow hero may be the star of the show, but he won't get anywhere without the creatures he meets along the way. Armed with just the Whistle and Stomp moves, he can influence and make use of these strange creatures' unique abilities. But what's up with that black goo? It's threatening your home world! Your goal is to get to the core of the corruption and save the island!

Originally released on the Wii U in 2013, and followed closely by versions for Windows, Mac, and Linux in the months after that, it has taken almost exactly three years for Toki Tori 2+ to finally come to PlayStation. This gap will have somewhat deflected some of the hype surrounding it for Sony fans, but to merely glance over and miss this charming little 2D platformer would be a mistake. You play as a small yellow chick whose only actions are to walk from left to right, stomp, whistle, and climb. Really, there's not much more to it than that. These simple controls must be combined with the environment in order to solve puzzles, activate gates, and move your way throughout the land. It's not instantly clear why you must do this, although the conspicuous absence of other birds, such as our protagonist, quickly becomes apparent. Not to mention the black goo which seems to be seeping out into parts of this otherwise beautiful land.

The game offers very little by way of exposition. There are no cut-scenes or explanations, and there's no real manual to help you through the game either. Instead, the title does a fine job of making you feel like a small chick trying to figure out your environment. And figure it out you must, since the limited actions available to you means that exploiting the environment is the only way to progress through the game. In doing so, these simple controls prove to be incredibly versatile. Whistling draws creatures towards you and stomping scares them away – this is the basic groundwork. Stomping near a frog makes the frog burp, a useless action in itself, but if you do it once he's chomped on a berry, then he'll belch out a bubble, which surrounds and lifts your chick into the air and across otherwise insurmountable boundaries. It starts out simple like this, but figuring out how to manipulate the creatures within in conjunction with your limited oeuvre of moves become far more complicated later on.

Indeed, you must time your stomps to make berries drop at just the right time in front of frogs that are hopping downstream. Or perhaps you need to attract fireflies by whistling to encourage them to fly alongside you as you make your way past the evil cave creatures which will gobble you up should you happen to let the light dissipate and instead be submerged in darkness. Careful not to let those fireflies get wet in the onrushing water, though, because the light will quickly wash out and leave you vulnerable to attack. You need to be aware of all of the little details in your environment as you move through it. You're not just a spectator, but an active participant in how things play out. Make a mistake and the odds are that you will perish and be returned to the last checkpoint. Thankfully, these are plentiful, and once you've figured out how to master a particular section, it becomes a far easier task to go through it a second time. On the off-chance that you fall into a ditch and can't get out, your chick can whistle a little tune that you must learn to return you to the beginning of that section.

Other tunes are also possible, and these are achieved by altering the duration of your whistles – quickly tapping for a quick whistle, and holding down for a long one. Learning each of the five tunes opens up new aspects of the game as it progresses, and like the rest of the game, is introduced through the game's environment rather than a pop-up dialogue box. Birds in trees will whistle combinations, and by paying attention and emulating them, you will learn new combinations which unlock new features.