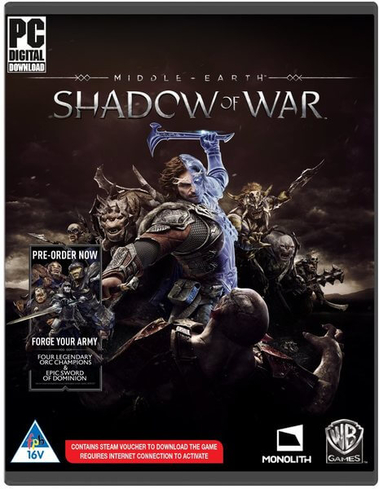 Middle-earth: Shadow of War is a sequel to 2014 hit game Middle-earth: Shadow of Mordor, its events picking up immediately after the first game left off. Raise an Orc army using your newfound powers and transform the hellish landscape of Mordor in your own image through conquer. Your nigh-unstoppable combat skills will be a great asset in this mission. Middle-earth: Shadow of War features: Nemesis 2.0 - now it isn't only about creating unique enemies. Forge alliances, get loyal cronies and field massive armies Visceral combat - chain vicious strikes, gut your foes with precise counterattacks, and use powers granted by the Wraith Sieges and overlords - lead your armies against Sauron's forces and take his fortresses for yourself. The region will change to reflect that Loot and stats - customize your appearance and abilities with tons of thematic loot, like Númenórean armor. Make your Talion unique The next chapter - now you get to find out what happened with Talion after his earthshaking decision at the end of Shadow of Mordor