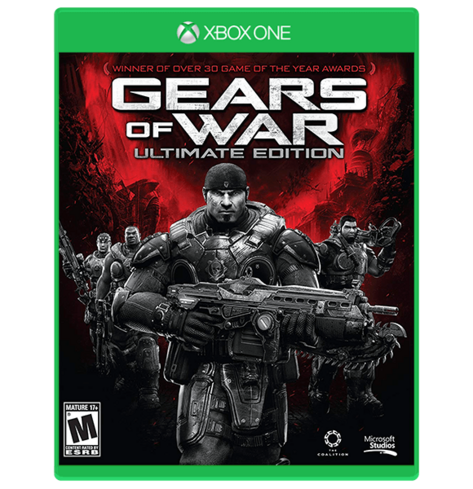 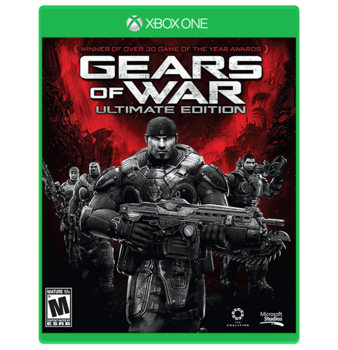 Get Set for Gears of War 4: Gears of War: Ultimate Edition is your ticket to early access of the beta for the next Gears of War.*

Experience the game that launched one of the most celebrated sagas in entertainment with Gears of War: Ultimate Edition. The shooter that defined the first generation of HD gaming has been painstakingly remastered in 1080P and modernized for Xbox One, and is packed full of new content including five campaign chapters never released on Xbox.

The story of “Gears of War” thrusts gamers into a deep and harrowing battle for survival against the Locust Horde, a nightmarish race of creatures that surface from the depths of the planet. Players live and breathe the role of Marcus Fenix. A disgraced former war hero, Marcus seeks personal redemption as he leads his fire team against an onslaught of merciless warriors from below.

For a limited time, purchase and play Gears of War: Ultimate Edition and get the entire Xbox 360 Gears of War collection for use on Xbox One.

* Gears of War 4 Beta: For early access to the Gears of War 4 Beta when it launches (expected Spring 2016), login to Xbox Live and play Gears of War: Ultimate Edition by 1st March, 2016. Must be 17+. Xbox One, broadband internet (ISP fees apply) and Xbox Live Gold membership (sold separately) required. Beta dates, content, and features subject to change. Not available in all markets. See www.GearsofWar.com for the latest information.

***Includes Xbox 360 titles Gears of War, Gears of War 2, Gears of War 3 and Gears of War: Judgment. Each title will work as part of the Xbox One Backward Compatibility program upon Backwards Compatibility general availability – expected autumn 2015. To qualify purchase and play Gears of War: Ultimate Edition on Xbox Live between August 25, 2015 and December 31 2015.Must be over eighteen years of age. Xbox One, broadband internet (ISP fees apply) and Xbox Live membership required. Dates, content, and features subject to change. Not available in all markets. See www.GearsofWar.com for the latest information. Xbox One Backward Compatibility feature works with select Xbox 360 games, see http://www.xbox.com/xbox-one/backward-compatibility. Xbox 360 accessories and Kinect, and games requiring those accessories, are not compatible with Xbox One consoles. Xbox Live and broadband internet required for initial download of game to console.