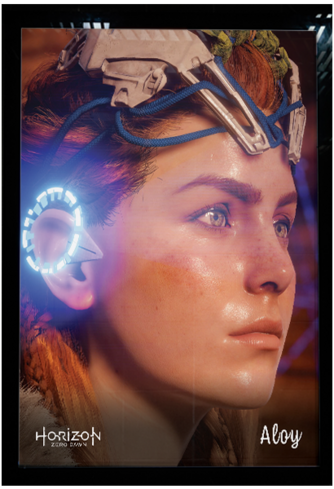 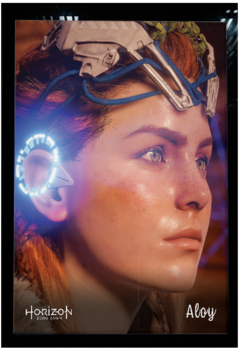 Aloy (Horizon Zero Dawn) - Gaming Poster is now available with best prices at Games2Egypt.com. Spice up your special space! Decorate your room with a big portrait ! Which can be used as a gift, souvenir or collectible! Perfect gift for fans of Aloy from Horizon Zero Dawn Game

This portrait inspired by Horizon Zero Dawn game, Aloy was created as a character who could provide many tactical options in battle. As a "hunter at heart", she has little compassion for machines beyond a "hunter's respect". She also has a gritty personality, disliking "comforts or ease", and tends to be "very forthright and blunt, sometimes even confrontational" in how she addresses issues.Guerrilla Games always envisioned the game as starring a strong female character, with game director Mathijs de Jonge citing Sarah Connor from Terminator, Ellen Ripley from Alien, and Ygritte from Game of Thrones as influences.Sony decided to do rigorous market testing, believing that adding a female lead might be a "risk", but approved her as the lead role. The developers were aware of the strong female character cliche and tried to make a more human character with a more interesting personality.Aloy's physical likeness was based on the Dutch actress Hannah Hoekstra