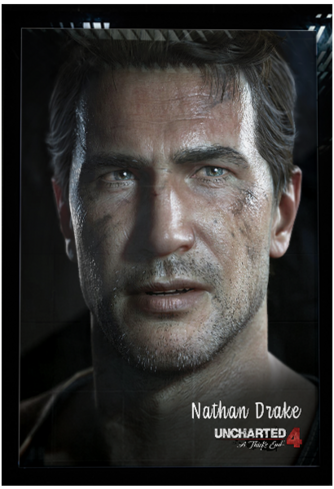 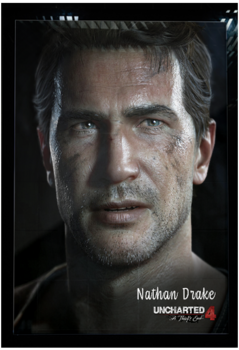 Nathen Drake from Uncharted game this portrait is now available with best prices at Games2Egypt. Spice up your special space! Decorate your room with a big portrait ! Which can be used as a gift, souvenir or collectible! Perfect gift for fans of uncharted game.

This portrait inspired by Nathan Drake (né Morgan) is a fictional character and the protagonist of the Uncharted video game series, developed by Naughty Dog. He appears in all mainline games: Uncharted: Drake's Fortune, Uncharted 2: Among Thieves, Uncharted 3: Drake's Deception, and Uncharted 4: A Thief's End, the spin-offs Uncharted: Golden Abyss and Uncharted: Fight for Fortune, the motion comic prequel series Uncharted: Eye of Indra by DC Comics, and other related media. A charismatic and good-natured yet rebellious treasure hunter, the player controls Drake as he journeys across the world to uncover various historical mysteries. He is played through voice and motion capture by Nolan North, who influenced Drake's personality by ad-libbing segments of the character's dialogue.